While the Entertainment Department works around the clock to get ready for Summer Nightastic, they are also working on a surprisingly ambitious plan to tie in with the upcoming Princess and the Frog movie this holiday season. Sharp eyed Disneyland fans that have seen the trailer for the film may have recognized the movie’s riverboat as looking suspiciously like the Mark Twain Riverboat.

That should come as no surprise, as the Burbank animators for Princess and the Frog made repeated trips down the freeway to Disneyland back in 2007 to tour New Orleans Square and ride the Mark Twain looking for inspiration in the park, something that Disneyland’s number one fan John Lasseter encouraged them to do. The result is visual icons in the film that are now easily transferable to Disneyland’s New Orleans Square, and you can bet there will be plenty of merchandise and food offerings tied to the Princess and the Frog in that section of the park this Christmas. The field trips the animators took to Anaheim also made the Disneyland Entertainment departments job that much easier when they got the greenlight to do a well-funded Tiana show for the holidays.

The entertainment plan is to debut a 20 minute Mardi Gras style mini-parade and musical show called Tiana’s Showboat Jubilee that will perform four or five times per day this November and December. The Showboat Jubilee will start as a procession of two dozen jazzy musicians, dancers and performers in the back alleys of New Orleans Square, marching and celebrating and encouraging people to parade along with them down to the riverfront. When the growing procession finally heads out of New Orleans Square and down towards the water, the Mark Twain will depart from its dock and steam towards the bend in the river in front of New Orleans Square.

On board the Mark Twain for each show will be 50 specially selected park visitors, no doubt picked by the roving scouts because they were wearing one of those “Celebrate” buttons that are de rigueur for any Disneyland visitor nowadays. Along with the hand selected tourist families hanging along the riverboat’s railings pounding tambourines and waving flags will be Tiana herself, plus her prince and Louis the singing alligator and comic relief in the movie. The rowdy procession and the Mark Twain will both stop alongside each other at the river’s edge, and a 7 minute musical show takes place that is predictably heavy on audience participation and dancing.

Once the show is over, the procession heads back into New Orleans Square and the Mark Twain blasts its whistle and steams on for the rest of its trip around the river. The 50 guests on the Mark Twain will then get a special meet n’ greet time with Tiana and her characters while the Mark Twain makes its way back to the dock.

Tiana’s Showboat Jubilee is planned to debut at Disneyland in early November, several weeks before the film opens in theaters nationwide, and the Jubilee will then run daily through the busy Christmas season. We’ll of course have more info for you later this year on how to get your clean-cut family picked to join in the fun on the Mark Twain, if that’s your scene. 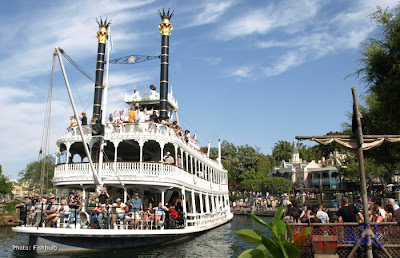 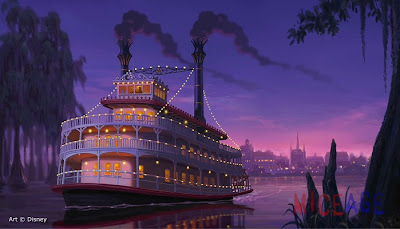